THE JOURNALISTS' TRUST IN JOURNALISM

The problem of the loss of trust in the Press is, of course, international and has already acquired timeless features. Particularly, in Greece, of which we can speak from experience, the deficit of trust in the Media is, we could say, an entrenched situation –so much so that one has to wonder whether bringing it up impresses anyone else, whether anyone other than the journalists themselves, when they do it, is striving to reverse this situation. One only has to think of the use of the term “fourth estate” in public discourse: the signifier that once might have denoted the autonomous and controlling role of the Media, for the sake of the public interest, has long since been used mainly to derisively denote a sectoral leverage derived not from the control exercised over powers but, on the contrary, from the entanglement of the media industry with them.

And then come the numbers: in the annual benchmark survey on trust in news, the Digital News Report by the Reuters Institute for the Study of Journalism of the University of Oxford, in 2022, Greece maintains the traditionally low levels of public trust in news and, it also comes last, out of 46 countries, in terms of the percentage of people who believe that the Media are, on the one hand, independent of undue political influence (7%) and, on the other hand, independent of undue business influence (8%). Therefore, the public’s opinion, as reflected in the Report, “complements” the annual report of Reporters Without Borders, which places Greece in the 108th place in terms of Press freedom, out of 180 countries worldwide.

Hence, a domestic survey on the trust of the public in journalism could be considered a superfluous task, an exaggeration. However, it is obvious that at iMEdD we did not decide to carry out such a survey actually wondering what the participants would respond to a question that has already been answered. At the time, in view of the International Journalism Week 2022, we decided to do so in the belief that there is added value in exploring the public’s attitudes and perceptions of journalism alongside those of its practitioners. Information is, after all, a commodity that some people offer, because everyone has a right to it. Therefore, how do the practitioners of journalism perceive it and how do those to whom it is addressed receive it?

The nationwide survey on public trust in journalism, which was conducted by the Public Opinion and Market Research Unit of the University Research Institute of the University of Macedonia, from September 1 to September 9, 2022, with the participation of 1,536 citizens, is presented together with the corresponding survey on journalists’ own trust in journalism. And it comes to highlight points of convergence and divergence between the views and experiences of those who produce and those who perceive the journalistic work.

In terms of values, the public agrees with the opinion of professionals in the field: 70.5% consider journalism to be a vocation and the vast majority (89.5%) agree that journalism is essential for democracy. However, in reality, and in the context of a broader trust crisis towards the institutions emerging from the present survey, citizens do not trust the Media, with the percentage of distrust towards them reaching 67.5% –in comparison, it is the second highest, after the percentage of distrust towards political parties, which amounts to 77.5%. 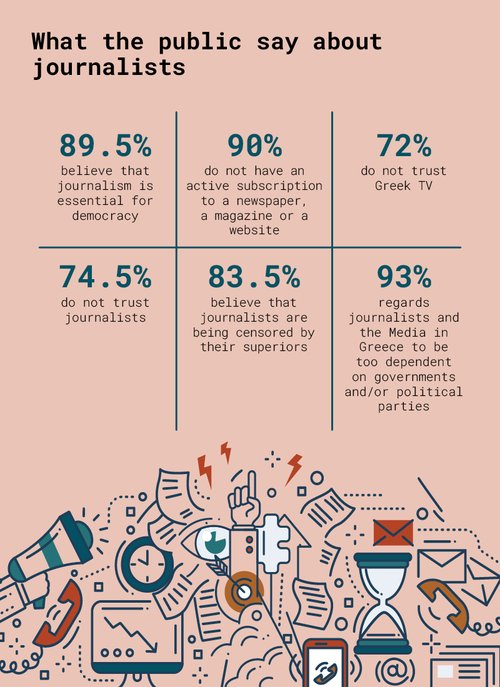 The trust deficit is expressed towards every media category, with TV being in the worst position (72% of the public have little or no trust in it), followed by websites (50% of the public do not trust them). In fact, this is the case, while websites and broadcasting are the most popular media categories, with 37% and 31% of the public respectively preferring to receive their news by them. At the same time, a recurrent finding is the even higher percentage of distrust especially among younger people, those who have received advanced education and those who, on the Left-Right political spectrum, position themselves on the Left and the Center.

Indicatively, when the public is asked to judge how the Media cover four current affairs topics, the response is “inadequately” by 62% for the war in Ukraine, 57% for the energy crisis, 55% for inflation and 62.5% for the wiretapping case. In fact, with regard to the latter, which, on the one hand, constitutes a journalistic revelation and, on the other hand, includes journalists as victims, 34% of the public respond that it is “definitely inadequately covered” and 28.5% say “rather inadequately”.

Public opinion remains unchanged when participants are asked how much they trust journalists in particular: 74% of the total sample express little or no trust, and this percentage also increases when the analysis focuses on younger age groups, graduates of advanced education programs and those who identify themselves politically at the Center and to the Left of it.

Even though the public considers journalists to be well qualified (65%), the vast majority (85%) believe for them that they “attempt to manipulate people” and also consider them to be “censored by their superiors” (83.5%). It should be noted that the latter fact is confirmed by the journalistic community, since, depending on the individual motives or causes of interventions, only three or four in ten journalists state that they are “never” censored by their superiors. However, the public’s view of journalism as a profession seems to diverge from the working reality as reported by professionals: while 54% of the public believe that journalists “are well paid”, 55% of journalists say they are not always paid on time. In fact, 28% of the professionals who participated in the survey on journalists’ trust in journalism state that their monthly net income from the profession does not exceed 800 euros and 29% that they are paid between 801 and 1,200 euros net monthly.

On the other hand, almost identical opinions between the public and professionals emerge in response to the research question whether there is an excessive dependence of journalists and the Media on governments and/or political parties in Greece: the public respond positively, with percentages exceeding 90% in each case. In fact, when the question is posed to citizens, in the form of a dilemma, as to whether the highest possible professional integrity on the part of journalists would be sufficient to increase trust in journalism or whether it would be sufficient to eliminate interference in their work, citizens mainly answer the latter (48%). 26.5% place themselves in the middle, while 19.5% consider the highest possible journalistic integrity to be sufficient.

At the same time, when asked to evaluate the Media in Greece in terms of their freedom, independence and control exercised over power, respondents give a very low score of 47.5% to the freedom of Press, 66.5% to its independence from political power and 65.5% to its economic independence. However, the public itself predicts the future viability of the sector when responding that: firstly, they do not actively subscribe to any print or online media (90%). Secondly, they would not keep reading their preferred news websites (70%) if these were to become subscription-based from tomorrow morning. Thirdly, they do not believe that the public should have to pay for the journalistic content they consume (68%) and, finally, online news media should derive their revenues from advertising (74.5%).

Thus, one cannot help but reflect, once again, on the vicious circle of financial independence: how can journalism be solid, viable and self-sustaining if it is not supported by its audience? And, on the other hand, how can it expect to receive the support of the public when it does not have their trust? This twofold question, to which of course discussions on the quality of the news are increasingly leading, has not been answered –and is not answered in the following pages either. We hope, however, that the following sections will contribute to a broader discussion of (self-)criticism and the search for ways out of the vicious circle.